March 2017? I hear you ask. Oh, that Rae, skipping over February entirely and thinking we wouldn't notice. Well, I have news for you! I have in fact written a post about February, but a chunk of it is currently held hostage on a different computer from the one I'm writing on right now. Also, it was such a hard post to write that the emotional cramp from it kind of put me off finishing it, or writing anything else, for an embarrassingly long time. February sucked, dear imaginary reader. March was better, though! Let's bang this one out and come back to February later.

Here are some photos I took this month: 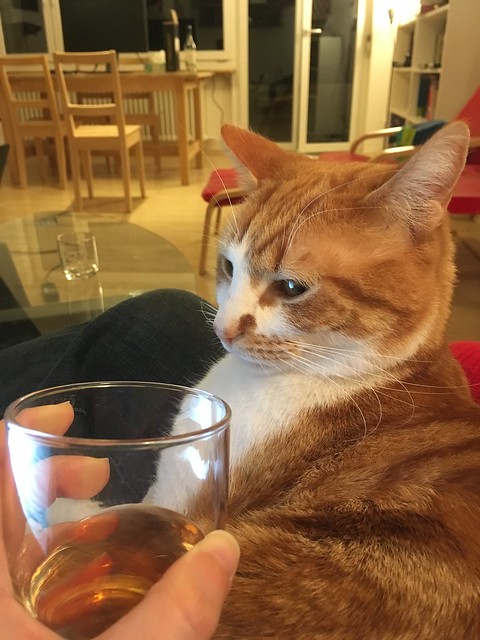 The most exciting event of the month was that I attended PyCon Slovakia, held in Bratislava. I'll write more about the conference itself in a post for my other blog. I'd bought my ticket months before on a lucky impulse, because they were cheap and Bratislava is accessible by train. On the way there, reading my friend's Mycroft Holmes novel and musing on the beautiful Austrian mountain scenery around the railway line, I thought about how very lucky I am to be able to take this kind of trip.

The next morning I woke up with a streaming cold, a headache, and a horrible attack of social anxiety. On arrival at the conference, I discovered that all the talks that day were in Slovak. I went back into the city, couldn't find the National Gallery and had a frightening encounter with a man in the main pedestrian area.

Still, my point stands! I am lucky, and the trip improved. I found the gallery on my second go round, and wouldn't have been able to visit it if not for the extra day away from the conference. I spent some time learning basic Slovak and discovered, though still very superficially, how beautiful the language is. One day, I hope to get the chance to learn it properly. As for the man... I spent too long talking to him and should, I know, have got away sooner. It was broad daylight in a tourist area, though, with open cafés I could have bolted into if necessary. After I'd listened to his grievances for a long time and offered what advice I could, he eventually let me leave — thanking me for my 'kindness'. I hope it was a small good thing in his life.

I skipped the conference social in favour of a fun vampire novel and an early night, went to the talks but spoke very little during the days: it was hard even to be in the same room as a big group of people. By the last evening, I felt recovered enough (physically and mentally) to join a group for beer after the talks had finished. (Twitter is a huge help for conferencing as an introvert. Following and using the conference hashtag is a good way to participate when you can't look anyone in the face, and can help you acclimatise to people enough to approach them physically.)

We ended up talking about beer, Europe, and Open Source, filming silly videos of ourselves, making a nighttime tour of the public art in the city centre, eating dessert in a coffee shop where one of the group accidentally set his cheesecake on fire before pouring water over it, and ending up at an AirBnB where someone else cooked a full meal of leftover salmon, vegetables and rice. The next day some of us met for breakfast at the same coffee shop. The staff recognised us.

It was a stunningly bright spring day. Two of us spent it wandering the city's attractions: the castle, the river, the oddly cakelike Blue Church. Then I took the sleeper train home to Zürich.

There were several other social events over the month. I hosted a Swiss WriMos meetup at my office, not for writing but for tea and chat. My friend Thereza held a temaki sushi dinner party for her birthday. The food was delicious (of course!) and it was fun to meet some of her old classmates from her time studying Japanese at uni.

Our DnD group played another round: my nerdy elven wizard Valandra Isiilkur not only got to steer a magical floating island with her brain, but also found another cellar filled with wines of every quality and vintage! Valandra is having the best gap year ever. If the owner of the island comes back and agrees to be her doctoral advisor, she'll have everything she wants.

At work, we interviewed candidates for a new Scrum Master, since our current one is leaving soon. I'm sad about this because she's very good at her job, but we've found somebody both qualified and enthusiastic who should be a good addition to our team, if not a faithful replacement for her.

Back in the UK, my stepdad hasn't been getting better, of course, but he's not dropping fast and the family seems to be settling into a new equilibrium.

I continued reading about AD/HD and revelations kept happening. My private Twitter account is about 50% AD/HD content at the moment; there's not much I can do to help that.

March has been much less tough to get through than February. I've spent much of it feeling like I was recovering from the previous month, but a lot of very cool things have happened. April's going to be exciting. Onwards!