Some of this is probably thanks to the novelty effect, since I started using the Todoist app in the first week and figured I should fully commit in order to get the benefit of it. I moved my to-do list, which previously lived on Workflowy, there. Todoist is a much more visible place for it, since it sends you reminders of what's scheduled each day and adds a badge to the app icon with your extant number of tasks. I'm also using Docket to tie Todoist and my Beeminder eep days together.

Whether it was this reminder or just exasperation on my part that it had taken so long, it doesn't matter: I have finally, legally changed my name! I tentatively asked my team at work if anyone would like to witness it for me and two of them immediately offered. I was touched. I'm still going through the process of proving it to all relevant bodies (which will definitely be another blog post), but I'm now legally designated by a name that's gender neutral, still related to the names my parents originally gave me, and includes my favourite word as an extra middle name. It's a great feeling. Somehow, it really does make a difference that it's official.

While I was juggling bureacracy on this front, Kelsey spent her time trying to get a work visa for her next postdoc in Cambridge. She'll be leaving as soon as it's all in hand — this is, of course, more complicated than that sounds — and David and I will miss her quite distressingly. We'll have more room for guests, though (hint, hint).

The second best news of the month was that we have finally been paid the money owed to us by the startup weasels who employed David and me in 2013! We got all of what we were owed in the final bankruptcy proceedings! Hooray!

Here are some photos from the month: 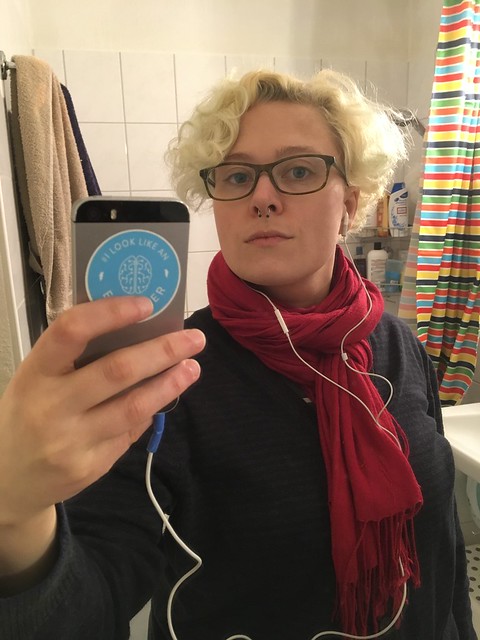 The month was a very full one, especially for David, who gave a guest lecture at ZHdK on making a living as an indie game developer, co-organised the Zürich location of the Global Game Jam, and ran the Ludicious Unconference for the second year running. I helped out a little bit with GGJ, mostly by checking names at the door on the first afternoon: a very cold few hours sitting in a vestibule with an uncloseable door. Though I didn't actually make it to the Unconf this year, we did both attend the SGDA/Ludicious gala dinner on the Friday night, followed by Marioke — which turned out to be ridiculous amounts of fun, mostly thanks to the excellent compéring of Ste Curran. David and I sang about Nethack to the tune of Loveshack and I regretted not wearing my Nethack t-shirt! Next year?

It snowed through most of the month, sometimes heavily, sometimes for days on end. We walked to my office in the morning through a glorious, whited-out and transformed landscape. At the tenth anniversary party for my company, which took place in a huge club in Fribourg, walking back to the railway station in a neon-lit blizzard was perhaps the best part of the night. (It was a great party full of good people; I was just suffering social exhaustion and was glad to leave early.) I saw Dan Crow, my oldest Cambridge friend, and caught up with him in a café packed full of Saturday-afternoon escapees from the weather and their winter coats. This autumn we'll have known each other for fifteen years. I'm deeply pleased still to know him.

With a lot of hand-holding from David and cheering from Kelsey, I finally confronted my student loan paperwork this month. This was one of my goals for last year, one of the two major ones standing in between me and playing with my Lego Antarctic Research Station from Christmas 2015. I was really hoping they'd reassess what I owed them with more information about the time I was unemployed before getting my current job, but that does not seem to be the case. Oh well. At least we both know how we stand, now. I hope that the more Brexit drives down the value of the pound, the more I'll be able to pay off.

I spent a whole day in the Bern office of my company, getting trained about Holacracy and how to use it. The company has now officially committed to Holacracy as its 'operating system' and I'm honestly fairly satisfied with this, despite having been suspicious and mistrustful when it was first proposed. I feel like there should be a blog post in that, for my realname blog, and in fact optimistically proposed to write one during the training day, but I don't know where to start. With the basics of Holacracy as a system? With my experiences within the company? With what I learned at the training, which was very useful but really more refinements to things I had already learnt? I will think about this some more.

In cultural events, we saw The Arrival (an absorbing and well-judged adaptation of the original story), watched Reinhold Messner speak about his life climbing mountains and what it's taught him (he is a good and engaging speaker, though his accent in German was hard for me at times) and, last thing of all in the month, went to see the Flaming Lips perform at the Volkshaus. They gave a stupendous show! It was a concert, a carnival, the best birthday party of your childhood, and a very good trip all combined. Here's a review of their London gig in this tour.

In short, January 2017 was a busy and productive month for me. There wasn't much time to sit and write or introspect, but I've already achieved one of my new year's resolutions and started working towards others. I felt organised and optimistic. February is taking rather a different turn. It's not over yet, though.